Giovanni Martinelli was born in Montagnana (Padova) on 22nd October 1885. He was first of fourteen children, son of a skilled cabinet maker. At a very young age he starts to work at his father's shop and also finds the time to sing in church with a very melodious "white voice". Thus, his passion for music begins. He plays the clarinet in the town band and then in the army band during his military service.
It was during his military service that a colonel discovers his remarkable singing skills and upon military service discharge, accompanies him to Milan and manages to obtain him a scholarship at a well-known theatre agency always in search of musical talents. The young tenor studies hard under the master Giuseppe Mandolini and on 2nd December 1910 makes his début in Rossini's "Stabat Mater". The positive result gained him his real début on 29th December at the Dal Verme theatre in Milan in Giuseppe Verdi's opera "Ernani." However his fame begins when Arturo Toscanini and Giacomo Puccini, during an audition at Casa Ricordi, choose him to perform Johnson of Sacramento in La Fanciulla del West, on the occasion of the European début of Puccini's new opera at the Costanzo theatre in Rome. Besides his voice, Martinelli also has an instinctive scenic skill which suits his physical appearance well. Since then he performed for over sixty years on European and America lyrical stages. 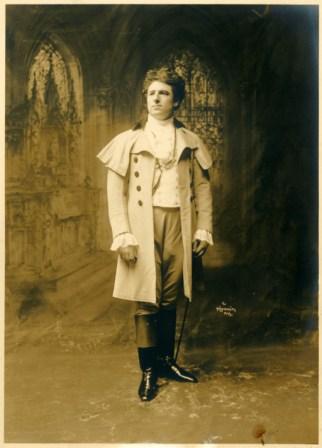 He carried out a great number of performances, over 650 in the 36 operas represented at New York's Metropolitan Opera alone, where he was able to renew his contract for over thirty consecutive years (a record never equalled). He is friend and admirer of the great Caruso who during his first performances of Canio in I Pagliacci by Martinelli, as a gift gives his costume to the young tenor in sign of respect and friendship. The most challenging operas which were sung by the great tenor before his death were assigned to Martinelli, the only one able to emulate him. He then sings "La Juive" and "Otello" of which he becomes the most famous performer. After becoming a real star during the "roaring years" of America, he establishes relationships with outstanding personalities which marked the history of those times especially in the United States where he is still celebrated and loved today.
When in 1967 at the age of eighty one, almost just for fun, he accepts to perform the Imperatore from Puccini's Turandot, replacing the second lead, he astounded the audience and critics for his ability to hold his breath, his confidential high pitch and the renowned scenic appearance.
Finally in 1968 Martinelli records "Perché volete voi" Zandonai's Francesca da Rimini, a symbolic last will and testament of the artist's voice who dies a year later in New York on 2nd February 1969.