The Voice
The Voice of Giovanni Martinelli
(By: Roberto Scandurra)
The voice of Giovanni Martinelli, a tenor mainly remembered as a great interpreter of the lyric and spinto-dramatic repertoire, had special features which allowed him to perform a wide range of interpretations. The vocal extension, which in the high pitched register reached D-flat, enabled him to go from operas like Gioacchino Rossini's "Guglielmo Tell" and Giacomo Meyerbeer's "Les Huguenots" to Giuseppe Verdi's "Otello" and also "Lucia di Lammermoor" where, in the role of Edgardo, he achieved unforgettable success both in New York's Metropolitano Opera, his home, and at the Colon Theatre of Buenos Aires.
His voice, which was of great beauty and resistance, had the seducing sharp sound typical of the "theatrical" voices, which microphones or recordings of that time do not do him justice. Giovanni Martinelli had an athletic body, he was born in Montagnana on 22nd October 1885, in the Veneto region, from a family, like many in the late '800's, of humble origin.
At a very early age he started working hard in the workshop of his father, a skilful cabinet maker. With the early manifestation of his vocal qualities, the young man was entrusted to the master Giuseppe Mandolini who was able to define and guide in a worthily manner that voice which revealed extraordinary skills.
The debut of the promising tenor took place on 2nd December 1910, with Rossini's "Stabat Mater". On 29th December of the same year, at the Dal Verme Theatre in Milan, he was proven a distinguished interpreter in Giuseppe Verdi's opera, "Ernani", where his role as lead character, enabled him to express and emphasise his characteristics of power and vocal extension, typical of the dramatic and heroic tenors. 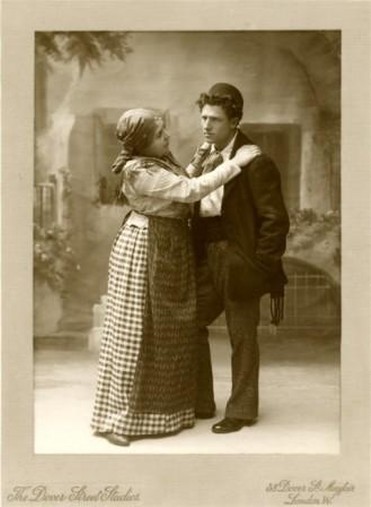 His uncommon voice, soon acknowledged all over the world, made him the most demanded interpreter in the main theatres, especially in the greatest operas of the Italian, French and German repertoire, which were reproduced in thousands of acts throughout his career, which lasted over fifty years.
He earned the palm as successor of Enrico Caruso at New York's Metropolitan Opera, the theatre where most of his career was carried out.

The admiration for the voice and technique of Enrico Caruso, of whom he was a very good friend, partly influenced Giovanni Martinelli's already excellent vocal emission, which if some recordings that are available attest it, especially in the high pitch, then it seems to blend with the example of the great Enrico. An indulgence towards a great interpreter and to the flavour of time, which were certainly not necessary because his magnificent and brilliantly supported voice, did not need to imitate the great Neapolitan colleague: nature had generously bestowed him with the possibility of showing off a sharp voice, volume, resistance and a very well defined vocal and artistic personality.
In fact, during the years of maturity, Giovanni Martinelli, at the theatre and not only in recording studios, took up the role of "Otello" carrying it out with great success in 19 acclaimed acts, one of these, was recorded at the theatre on 12th February 1938 and left to future generations.
(see discography section on this site)